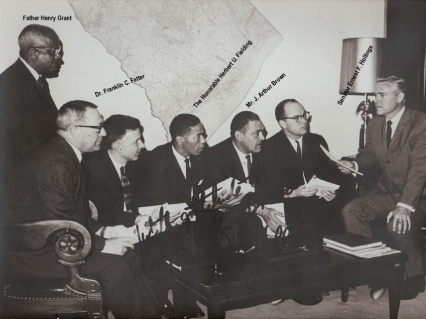 As a leading Federally Qualified Health Center (FHQC) in South Carolina, Fetter Health Care Network is committed to serving all those within our Lowcountry community, regardless of their ability to pay. Our more than 50-year legacy as a source of modern care for Charleston’s low-income population has a history that has guided our decisions and services since our very beginnings.

First founded in 1967, Fetter began as the Franklin C. Fetter Family Health Center, located in the basement of the Medical University of South Carolina (MUSC). The center was named after Dr. Franklin C. Fetter, the former Dean of MUSC and a key member of the concerned citizen group who helped this project acquire funding.

The operation was established as a small demonstration project funded by the Federal Office of Economic Opportunity to provide a full range of health care services to Charleston’s low-income community.

Over time, the project would evolve and expand along with its client base, with the facility recognized as an official Community Health Center under Public Law 9564, Section 330, of the Federal Regulation.

In 1970, Franklin C. Fetter Family Health Center would relocate to an independent location at 51 Nassau Street. The center received status as a 501(c)3 nonprofit organization in 1975.

As the need for our assistance grew, so did our reach throughout the Charleston area, with facilities opening in communities across the Lowcountry. In 1983, the Cross Health Center was founded to assist patients in the Cross community, with the Summerville Health Center opening its doors five years later.

The start of a new century was a call to action. Fetter’s commitment to its Lowcountry community would motivate our further expansion to service more counties, neighborhoods and neighbors across the state.

In 2001, Fetter Health Care Network would emphasize the health of our local children with the launch of Enterprise Pediatrics. This new pediatric location would serve community members in and around the Union Heights community.

In 2008, our mission to do more would continue. Fetter would see the grand opening of our Walterboro Health Center in Colleton County, as well as the East Coast Migrant Head Start seasonal care site two years later in 2010.

Promoting the health of our patients requires an ability to evolve with their needs. The decade between 2011 and 2021 would be filled with the launch of various new Fetter locations and initiatives.

In 2011, Fetter launched a new facility to service the mental health needs of our Lowcountry communities: our Charleston Dorchester Mental Health clinic. In 2012, we focused greater attention on our families of Charleston by opening the Hollywood Family Health Center. In 2014, we began offering increased oral and dental health care services through our Community Dental Center and also opened our Johns Island Family Health Center.

Though the new decade did not begin as many had hoped, Fetter doubled down on our commitment to the community. As COVID-19 swept across our community, our team served as an essential resource for those in the Lowcountry. Fetter Health Care Network led the way on the front lines in the battle against this deadly virus, providing more than 20,000 COVID tests throughout four counties while operating a new Mobile Medical Unit and renovating our Enterprise Pediatrics Health Center.

In 2021, Fetter aided in our nation’s vaccine rollout, administering more than 20,000 COVID-19 vaccinations in four counties. The South Carolina Department of Health and Environmental Conservation would recognize Fetter Health Care Network as one of the first “Community Heroes in South Carolina” for these efforts.

Fetter for the Future

Our history is still being written today! As Fetter’s care continues to expand across Lowcountry, we still uphold our goal of providing patients with quality, affordable health care. Contact us today to schedule your next appointment, or visit us online to explore our complete list of services.